A while back I purchased a S&B CAI because it was the only CAI that came with a true air box. It didn't fit worth crap. The air box holes needed to be redrilled to reposition the box to clear the radiator cap and still it didn't fit well after that. The other problem was that the air tube sat too high above the throttle body and was a good 1.5" above the hood line. After modifying it I still wasn't happy with the way it fit. After some words with S&B they agreed to buy it back. Sure, their product didn't fit but at least they were nice enough to buy it back. So, A+ for customer service.

I then purchased a Volant intake and a Amsoil (EAAU3590) air filter. I decided on the Volant over something like a K&N because the Volant tube was larger, accepting the larger filter. Also, the K&N did come with a simple shield but then the shield seals to the hood, right about where the driver's side hood vent is located. Sure, I could use the hood vent as an intake but I put them there to extract hot air from the engine bay. So I didn't want to take away that function.

The Volant came with a small shield for the filter it came with but I wanted to use the larger Amsoil filter. The Amsoil filter is a cone style, 6" wide at the base, 9" in length, 5" at the top, and a 3.5" inlet. The shield wouldn't fit with the large Amsoil filter nor did it do anything in the way of blocking hot engine air. It was pretty much just a dirt shield. So after much thinking I decided to build an air box with a lid.

I decided to make a shield similar to K&N's, but extending further back in the engine bay to accommodate the filter location. I made the shield out of 3 pieces of .080" aluminum. One is for the rear part, one for the side and one for the radiator cap. I started with a cardboard mock up but it wasn't holding form as well as I needed it to. So I went with .020" aluminum for the mock up, which worked much better. I cut the aluminum with a combination of a kick shear and jigsaw then bent it on a metal brake. Making the shield took the better part of a day as I had to account for clearance issues with wires and other components in the engine bay. The lid was easier. I did use cardboard for the template than cut it.

The crappy cell phone pics below are of the air box being mocked up.

The air box will be sealed to the fender with weather stripping. For the larger or uneven gaps (such as the rear of the box with wires and curved inner fender, where the air tube enters the box and where the box meats the radiator support) I will use a rubber strip. I currently have a piece of rubber baseboard I am going to give a shot and see how it holds up to the engine bay temps. I painted the shield part using VHT Wrinkle Paint. The Lid is yet unpainted and I haven't decided if I will do anything else to it.

Oh.. that bracket on the rear is to hold the air tube. Its made out of a gas pedal I had previously made and decided not to use.

Now that I had the air box completed I had to get air to it. As some point Jeep decided to do away with the hole in the body panel behind the headlight. The hole was feeding the stock air box, and my 2000 XJ didn't have one. So I had to make a hole. After much thinking and posting this question here: http://www.naxja.org/forum/showthread.php?t=1063867. I decided on the placement of the hole. After masking off the area I was cutting in I did the cuts with a small air powered reciprocating saw. The saw fit perfectly in the limited space and cut the sheet metal like butter. I also cut a bit out of the fiberglass header panel and head light bucket. The blade on the saw was actually broken which made its length perfect. After cleaning the cut and de-burring it I put down a layer of POR15 engine enamel which I had left over form another project.

The hole I ended up with:

Cut in the header panel:

I forgot how itchy fiberglass dust it.

Thats it for now. I'll be installing the shield tomorrow and maybe working on the lid as well. I'll update this thread as I proceed with the install.

woodjeep
I made it to triple digits!

Nice metal work. I'm still a little unclear on how you get fresh air into your box. On my 92 still with the stock airbox, a square tube comes out of the front of the box and presses against a square hole in the front tin. I purchased an extra airbox and was going to experiment on how to increase the size of that square tube to get more air into the box. The new engine will be a 4.6 but its still my DD and my plan was to reuse the stock/slightly modified box with the K&N square stock sized filter. I hadn't thought much about it until I saw your post. I was kind of thinking along the lines of cutting the square tube off flush and running 2 or 3 inch dia pvc straight down off a right angle flange , kind of like an upsiddown snorkle or something of that nature
Top

I was suffering from the same problem. I am living in the United Arabic Emerates and we have around 120F during the middle of the day. I feld an huge difference with my stroker on hot engine and cold engine. So I tryed to sepoerate the filter like silver XJ did (also with the hole behind the head lights), but it did not make me happy. Biggest reason for me whas that even if I get "coold air" from outside, it would be still to hot. Now I changed the filter to an closed filter (K&N Apollo) and connected the hose to the kabin which have AC and therwith REAL cold air. Sure there is an noise, but for me in an acceptable limit. The engine now dosn't lose any HP from the hot engine bay and external air temp and I have the impression that it also keeps the engine a little cooler, but this is to early to say after few days only. 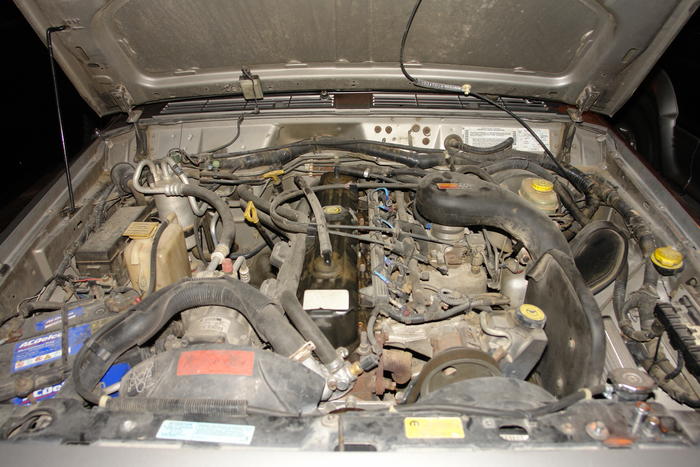 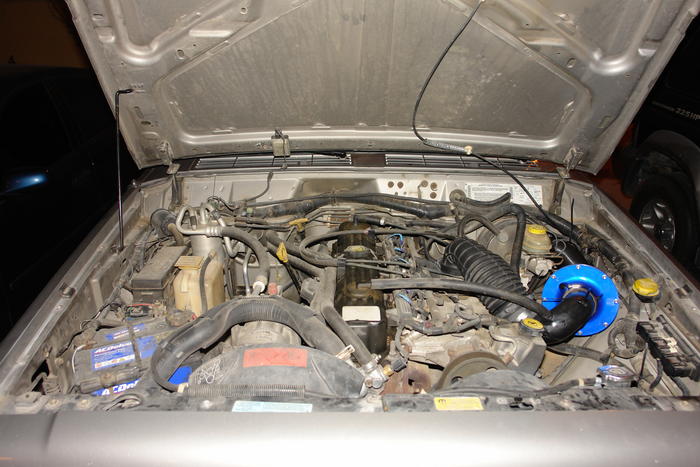 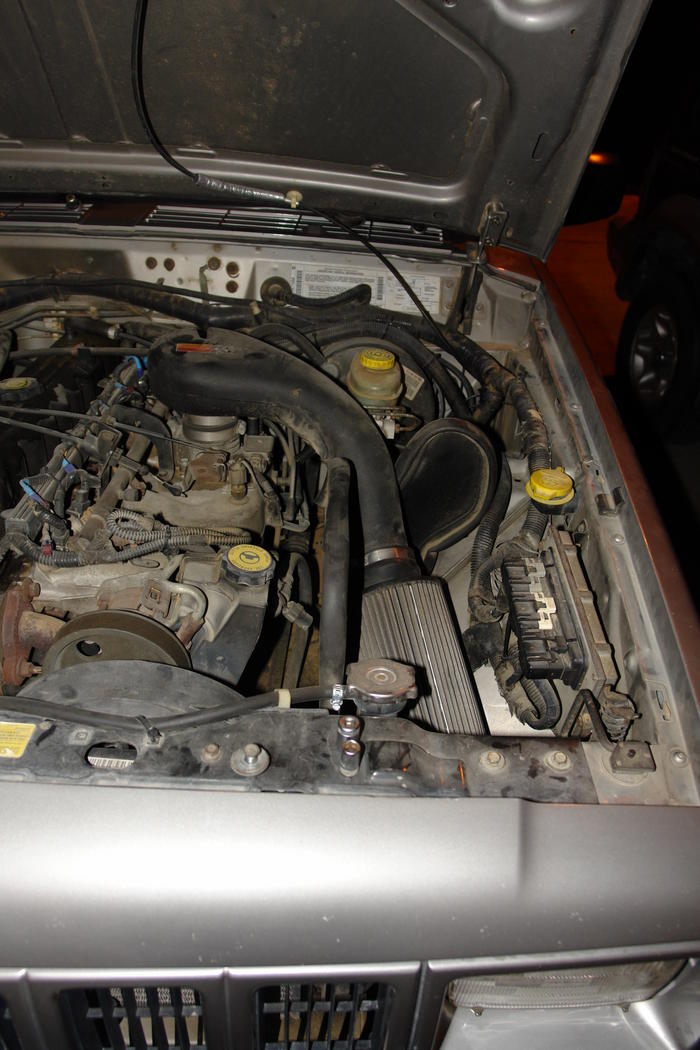 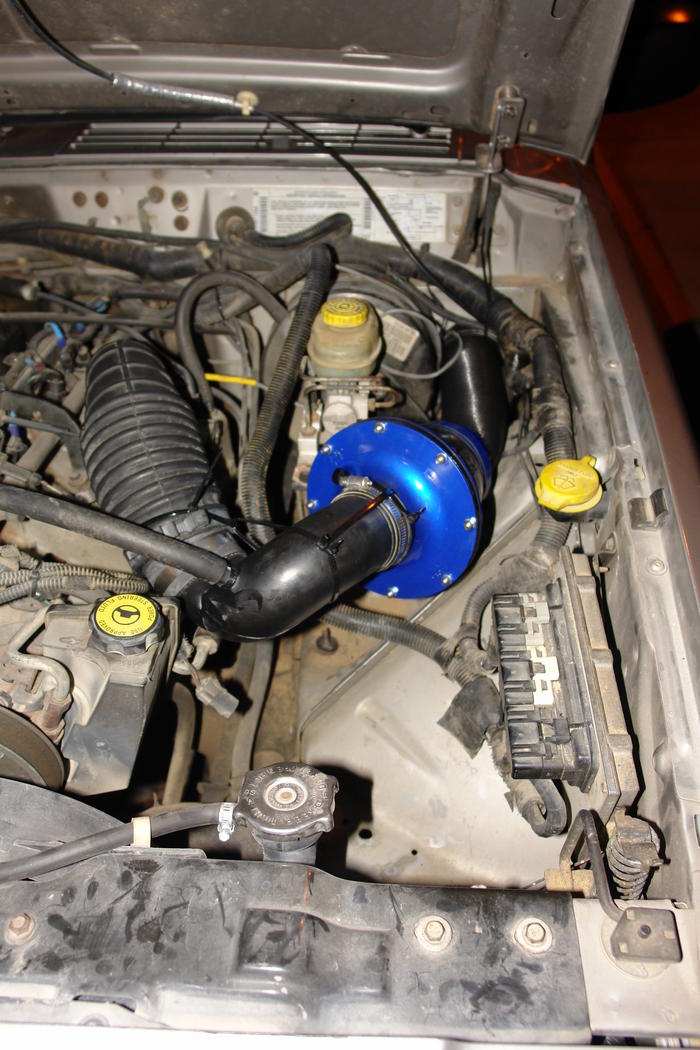 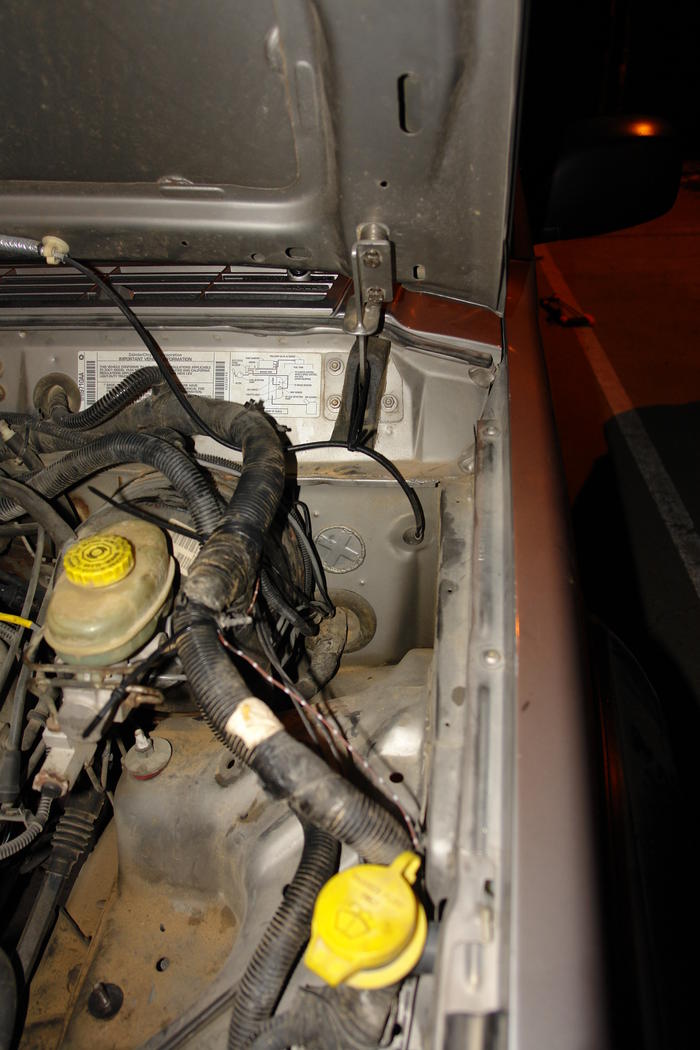 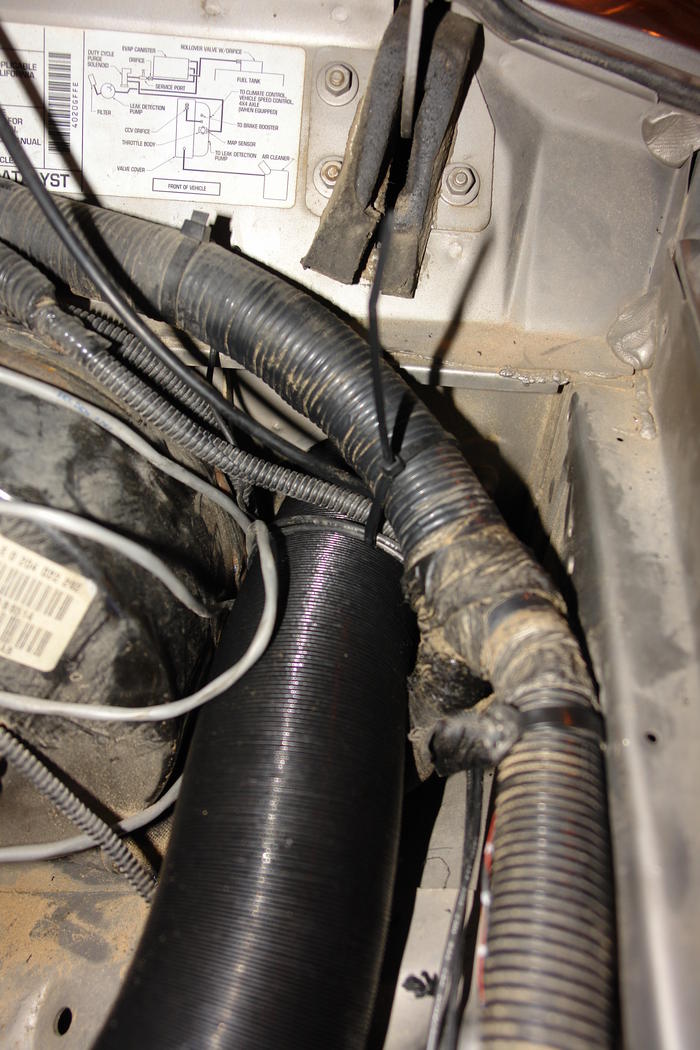 I forgot the Pictures from the inside! 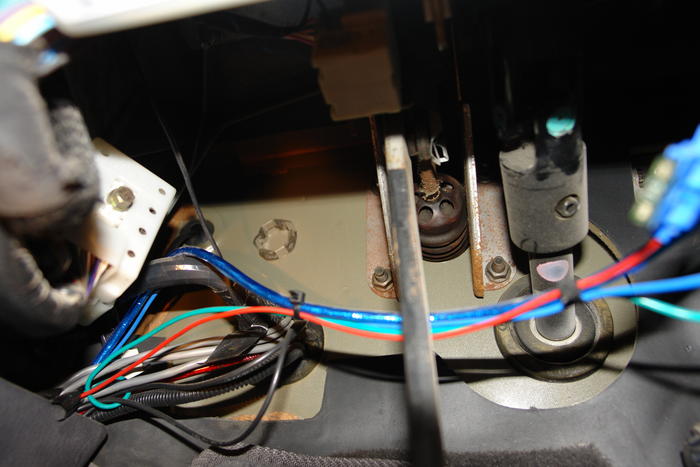 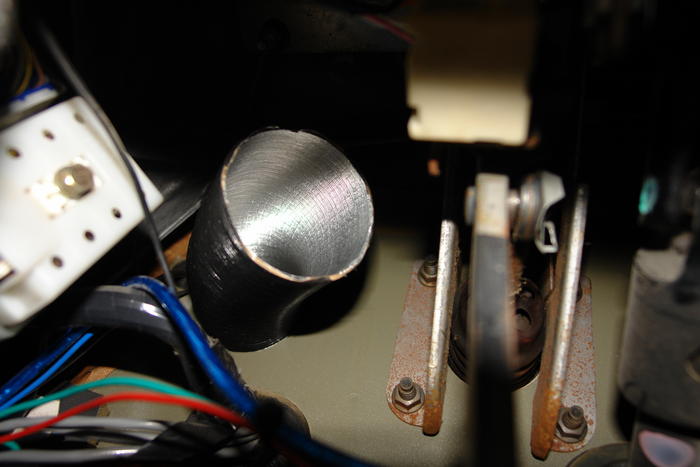 I'll give you both an A+ for creativity.

Here's mine (with desert dust for free) in case you forgot what it looks like:

The majority of my inspiration came from CAI companies than actually have products that come with air boxes. Such as the Volant for the SRT8: http://www.volant.com/edetail.asp?ID=474 As well as the need to bring cool air tot he engine and the feeling of a loss of power when the engine gets hot. I'm sure it could be the clutch fan too, but I will be taking care of that next.

SilverXJ wrote:As well as the need to bring cool air to the engine and the feeling of a loss of power when the engine gets hot. I'm sure it could be the clutch fan too, but I will be taking care of that next.
I will, however, be relocating the IAT there, which did come from you.

There you are. Three more jobs for you to do:

1. Get rid of clutch fan and go dual electric.
2. Relocate the IAT sensor (you know where).
3. Insulate the underside of the intake manifold with a Thermotec heat barrier.

You'll notice much less loss of power when the engine gets hot, and especially after it's heat-soaked in slow traffic.
Top

Cheromaniac wrote: There you are. Three more jobs for you to do:

1. Get rid of clutch fan and go dual electric.

2. Relocate the IAT sensor (you know where).

Ahead of you on that one... I had the hole drilled yesterday.

3. Insulate the underside of the intake manifold with a Thermotec heat barrier.


Lol.. thats already done. I don't think its made by thermotec, but I used some of that gold adhesive foil stuff. As well as silver on the fuel rail and injectors and the engine bay part of the fuel line.

You'll notice much less loss of power when the engine gets hot, and especially after it's heat-soaked in slow traffic.

I installed the shield today and did some work on the cover. I probably went a little overboard on the cover, but it looked a little plain. I installed the weather stripping and the rubber baseboard. I'm interested in how the baseboard rubber will hold up to engine bay temps.

Filter side of shield with baseboard fitted:

Now the lid. I cut a hole in it on the router than cut a piece of 1/4" lexan so it would sit flush with the lid. I then cut a retainer for the bottom to hold the lexan and the rest of the rubber of the lid sealing. The retainer will be held to the lid with counter sunk screws.

Now I just have decide how to finish the lid. I could powder coat it blue like the valve cover, wrinkle finish like the rest of the box, or a gloss or flat black. Or I could leave it bare aluminum and give it a brushed finish.
2000 XJ. 4.6L stroker
00+ Viper Coil Swap | CPS Timing Increase Mod | Fabricated Airbox | Dash bezel, Arduino Multigauge & RD Conceal
Eat, breath, drink, sleep, Jeep, drink
Top

Finished the lid up last night. Think I might give it a polish one more time. I'll also eventually build something to seal up that hole for the hood latch.

All I can say is WOW

Thanx. Those bolts are stainless as I have a thing against rust. The only thing I don't like is the lid mounting. I am using those quick captured nuts. Not a fan of them but they work for now. I may later get some 1/2" aluminum stock and drill and tap that. Nutserts are an option but I don't want to buy the expensive tool for them.. however I believe you can use a nut and a bolt to seat them. Then again the aluminum angle might not have enough width for them. Or many be some kind of quick release mounting
2000 XJ. 4.6L stroker
00+ Viper Coil Swap | CPS Timing Increase Mod | Fabricated Airbox | Dash bezel, Arduino Multigauge & RD Conceal
Eat, breath, drink, sleep, Jeep, drink
Top

92tank
I made it to triple digits!

this might be a stupid question, but what does relocationg the IAT do? besides let it read cooler air, does it add more fuel or somthing?
Top
Post Reply
24 posts